Hunger begins to bite in the drought affected north 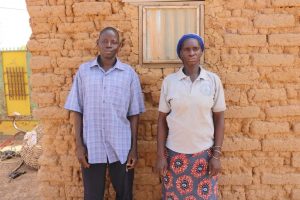 For Mr and Mrs Ouedraogo, pictured left. the food crisis in northern Burkina Faso has reached a crisis point.

Silemane Ouedraogo, with his 8 strong family, has been farming his land in Tangaye, in the north, since 1994.  The rains have been unreliable in previous years, but he tells us he has never seen it as bad as it has been during the last growing season.

He described the last few months to our partners when they met him on 9 April,

‘Our seedlings ran out of rain just at the time of flowering. The harvests were bad. I only got 4 bags of cereal . We started the consumption of these in October. Today everything is finished. I have some chickens that I started selling to pay for cereals but that will not last long. We are forced to reduce our food ration to two or often one meal a day. For children who can’t bear the hunger we try to guarantee them two meals a day”.

With no further harvest possible until October, many families like the Ouedraogos are seeking emergency food aid, as well as taking drastic steps to feed their families.  Our team witnessed a number of village 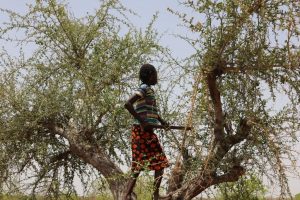 communities stripping tree leaves, despite their limited nutritional value (pictured right) in order to bulk out the food supplies they have left.

Working with other NGO’s and local government authorities, AEAD, our partners in Burkina Faso are seeking to respond with emergency food aid and support for farmers to plant the next year’s crops.  Any support would be welcome and you can donate to this work here.

You have Successfully Subscribed!